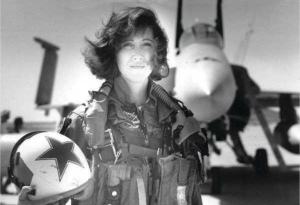 Nerves of Steel: She calmly landed the Southwest flight, just as you’d expect of a former fighter pilot

© Provided by WP Company LLC d/b/a The Washington Post
The pilot’s voice was calm yet focused as her plane descended with 149 people on board.
Subscribe to the Post Most newsletter: Today’s most popular stories on The Washington Post

“Southwest 1380, we’re single engine,” said Capt. Tammie Jo Shults, a former fighter pilot with the U.S. Navy. “We have part of the aircraft missing, so we’re going to need to slow down a bit.” She asked for medical personnel to meet her aircraft on the runway. “We’ve got injured passengers.”

“Injured passengers, okay, and is your airplane physically on fire?” asked a male voice on the other end, according to an air traffic recording.
“No, it’s not on fire, but part of it’s missing,” Shults said, pausing for a moment. “They said there’s a hole, and uh, someone went out.”

The engine on Shults’s plane had, in fact, exploded on Tuesday, spraying shrapnel into the aircraft, causing a window to be blown out and leaving one woman dead and seven other people injured. Passengers pulled the woman who later died back into the plane as she was being sucked out. Others on board the Dallas-bound flight braced for impact as oxygen masks muffled their screams.

For the FULL STORY use the following link:

The female pilot has since been compared to Sully.   Congratulations to her for her success; she has become a role model.