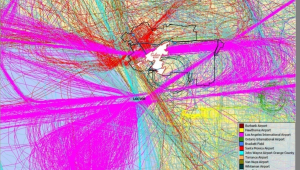 Q: What is the Southern California Metroplex Project?

A: The Southern California Metroplex Project is a comprehensive proposal to improve the flow of air traffic
into and out of Southern California by making the airspace safer and more efficient. The project proposes
to replace dozens of existing conventional air traffic procedures with new satellite-based procedures,
which are a key component of the FAA’s Next Generation Air Transportation System (NextGen). Metroplex
initiatives are completed, under way, or planned in more than a dozen metropolitan areas across the
country.

Q: How many new procedures does it include?