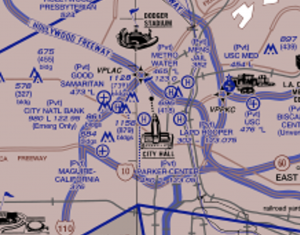 The LA Helicopter Chart Proposed Changes are based upon the chart not being issued as often as the TAC, and that perhaps the two charts should be combined; the resulting hybrid version would better serve the airspace community.

SCAUWG has long been interested in revising the LA Helicopter Chart Format, and has participated in the development of a prototype that presents what such a chart would look like. Consequently, pertinent updates to the helicopter chart have not been possible

Currently, the last seriously revised edition of the helicopter chart was some time ago! The TAC is updated every six months.

Addressing the present chart format, the Professional Helicopter Pilots Association proposed a detailed list of their suggestions for the improvement of the LA Helicopter Chart.  SoCal Rotars will no doubt continue to pursue their quest for proposed changes.

One of the most important requested revisions is item #1 on the list available for your viewing below.  An altitude needs to be assigned to the helicopter Ventura Freeway Route south of the Van Nuys Airport area wherein a USCG helicopter suffered a severe near miss due to departing jet traffic from KVNY.  Lack of an assigned altitude for this route was cited as a casual factor.  Currently, there are 3 routes that do not have assigned altitudes.

In the near future, SCAUWG.ORG's "ChartAware" flight Planning Application is planning to publish a downloadable overlay for use on iPads that makes accessing currently assigned route altitudes easier via an available touch button near the route.  Currently, the published route altitudes only appear on the helicopter chart legend.

The following file is presented in .pdf format