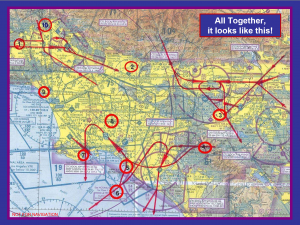 The LA Basin Hotspots are located in an area that represents one of the most complex in the world. It is made complex by a combination of factors not found anyplace else in the U.S.; or in the world.

The LA Basin is geographically constrained by a ring of mountain that surrounds an airspace region that serves between 13 and 15 million people; one of the largest population centers in the world.

The Basin runs northeast to southeast. The mountains that range to 11,000 feet; and nothing to the west but ocean. The region’s year-round good-flying weather has generated one of the largest centers of aviation users in the country – from beginning student pilots and schools to airlines and their highly trained air transport pilots; and including varied range of military operations, air taxi services, commercial operators, emergency, police, fire & other general service aircraft to media reporting & charter services.

SOON TO BE RELEASED:  SCAUWG.ORG Interactive Chart  - This chart will visibly identify and confirm in-flight Hotspot locations.  Already published for review by aviation professionals and certain seminar audiences, the website version is expected to be released in September 2019.

The ORIGINAL PowerPoint presentation by Al German that features each of the 10 aerial HotSpots can be accessed HERE. 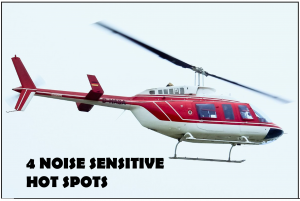 These HotSpots are designed to identify communities, neighborhoods and venues that have an increased level of helicopter-related noise complaints.

The HotSpot are not intended to depict geographic “no fly zones."

Rather, this information is intended to alert all aviation-related operators to the increased levels of community awareness to aviation operations within their neighborhoods. This information can then assist operators in implementing mitigation measures, including varying their operations in the vicinity of that HotSpot.

The listings below are current areas that the PHPA has identified as HotSpots as of this publication date: 8/20/2018.

Hollywood-Bowl-HotSpot    The PHPA is continuing our tradition of working with The Hollywood Bowl and The John Anson Ford Theater as we work towards bringing awareness to the issue of noise generated from helicopter overflights during the Los Angeles summer concert season.

LAX-Transition-Route-HotSpot     The PHPA is working with the Southern California Airspace Users Group in addressing noise complaints involving helicopter overflights in the area of the LAX Industrial Transition Route for helicopters.

Van-Nuys-HotSpot      The PHPA is working with the Citizens Advisory Committee of Van Nuys (CAC) and Los Angeles World Airports in addressing helicopter-related noise complaints in the Van Nuys area.

For nearly 40 years, hang gliders have shared the skies around Burbank Airport with general aviation and air transport aircraft.  Many pilots skirting the perimeter of the LA Basin hug the mountains to the northwest to avoid the Class C and Class B airspaces that get pinched by the mountains in that area.  As a result, there has been an increasing amount of penetration in the glider-marked area marked Mountain Peak area north of San Fernando Valley.

On the eastern perimeter of the LA Basin are two very popular parachuting centers. They are housed on private airports in Paris and Lake Elsinore. The drop zones around these airports are from 4,000' to 15,000'. Parachutes might open as the chutist exits the airplane; or the chutist may free-fall for multiple thousands of feet and only open the chute at 2000'.

Transiting planes looking up have difficulty seeing airplanes 2 miles above them ... and parachutists in free-fall are virtually impossible to see.  And chutists may free-fall for up to 70 seconds before pulling the cord. Harry Leicher, ATP, CFII, and USPA PRO Rated Skydiver put a presentation together to help pilots understand what to expect in and around Drop Zones. Click here to see the 37-slide PowerPoint presentation.