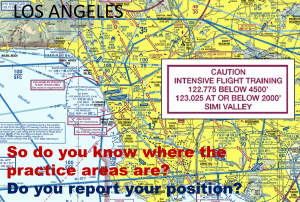 Practice Areas dominate much of the LA Airspace. Each has concentrated traffic, specific frequencies for use and altitudes; but their boundaries are not charted. In this section, SCAUWG shows you the approximate locations so you can plan safer flights.

While flying through Practice Areas being on frequency, being situationally aware via communicating your position and intended flight path, and becoming aware of other traffic in the area is critical.  This is particularly true when flying through areas noted for either waivered, or allowed aerobatic flight.  "Flight Following" alone is not sufficient when the traffic movement in these areas is much less than predictable!

A list of 13 Los Angeles Basin Practice Areas is accessible on the reverse side of the LA TAC Chart near the VFR Transition Routes.  It details the frequencies to use, and the altitudes to be aware of.  However, you will still need to know the approximate boundary information; and to fulfill that task, SCAUWG has you covered!   NOTE: Our depiction of the Redlands Area boundaries have been revised!  There is a small waivered aerobatic area NE of the airport that is referred to on the TAC Chart.  Not on the TAC chart, but now reported to SCAUWG is an area that lies to the west and parallels the Flyway Route that runs between Banning and Redlands. This area is non-aerobatic and by report is frequented by traffic from Rialto, Redlands, and surrounding areas.

SOON TO BE RELEASED:  the SCAUWG.ORG Interactive Chart that will depict Southern California Practice Areas, including those that are not mentioned on the LA TAC.  This Chart will be filled with information applicable to GA Fixed wing, Helicopter, IFR pilots, and others. SCAUWG.org has already published this chart for review by aviation professionals and seminar attendees.  The website release version is expected in September 2019.

Traditionally, a few presentations have evolved to outline where the Practice Areas are in the Los Angeles Basin.  All of the areas designated are from original work done by Al German CFI, on behalf of the SCAUWG.

Two forms of presentations are outlined below.   Select your preference; a PowerPoint or a .PDF file.